We had a surprise visitor a while ago; a male possum. He was sleeping peacefully in the roof space above the office area, rolled over in his sleep and fell almost two metres onto a padded chair (luckily). I heard the crash and raced out to see what it was, only to find a surprised, half asleep possum sitting on a chair in the office blinking at me. I called out to my daughter to get her phone and take a photo but he had climbed up onto a cupboard by the time she got there. 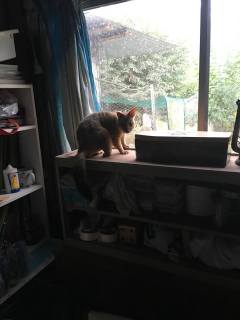 Our ceiling is lined with sisalation, which is sort of like a heavy duty tin foil. The purpose of sisalation is to reflect heat either back into the living space or back up into the roof space. In the humpy it also serves as a barrier to dust and dirt (somewhat) and as a lovely hammock for possums, feathertail gliders, micro bats, antechinus, carpet snakes and various lizards (oh and spiders). With the weight of all this life going on above us on this very thin membrane it is a miracle we haven’t had someone fall through the ceiling before.

After we tied up the dogs and escorted the possum out of the house and back up a pole into the roof (still mumbling about civil action and giving us a bad review on Facebook) it was decided that we have to do something about it.

There was a lot of discussion about possible answers ranging from;

It was decided to go the middle road and replace the ceiling with something rigid, but what with?

Ply sheets are expensive and would be eaten by white ants as fast as we could put them up, plaster board is much the same. Hessian or fabric are cheap but would not last any longer than the sisalation and is not very rigid. Then corrugated iron was suggested; it is rigid, white ants don’t eat it and it is relatively cheap if bought second hand. It is also easy to work with. I know it would make the inside look like the outside, but that is a small price to pay for not having a possum land in your coffee at breakfast.

I don’t think it will look too bad either, as these photos from google images show; 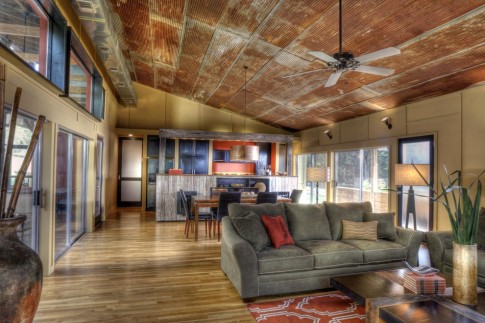 Now we just need to find some cheap iron for the job.

3 thoughts on “Lining the ceiling with corrugated iron”