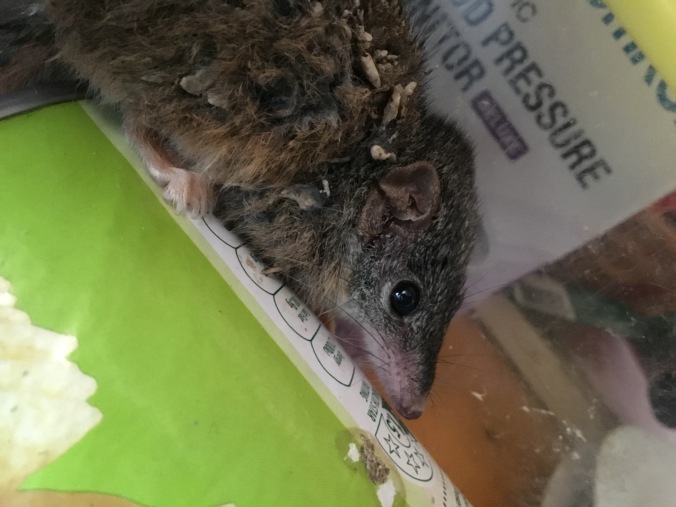 Whenever I mention antechinus everyone goes (and I quote) “huh?”. The next reaction (upon being shown a photo) is usually “Ewww, a rat”. These furry little animals are not rodents, they are marsupials. In fact they are a special type of marsupial called a dasyurid (a carnivorous marsupial). There are ten species of antechinus, most of which live in Australia (some also live in New Guinea).

Antechinus eat insects and will eat lizards and baby mice. In the humpy they do a great job of keeping the mouse numbers down and I have never seen a cockroach inside (we also have geckos and huntsman spiders to help with insects). They spend their days sleeping, hunting and playing in the roof space and climb down the posts to watch us from time to time. They will also raid the chook scrap bucket if someone forgets to put the lid back on; which is how I got the photos.

I had dumped half my sourdough starter out into the chook scraps because I didn’t have time to make anything with it, and must have absentmindedly left the lid off the bucket. My daughter text me later that day to say she had found an antechinus stuck in the dough in the bottom of the bucket. She put the poor, crusty little creature in a cage with water and a place to hide and left her to clean herself off. We were a bit worried that the dough would play havoc with her digestive system, but we had no choice but to watch and hope. 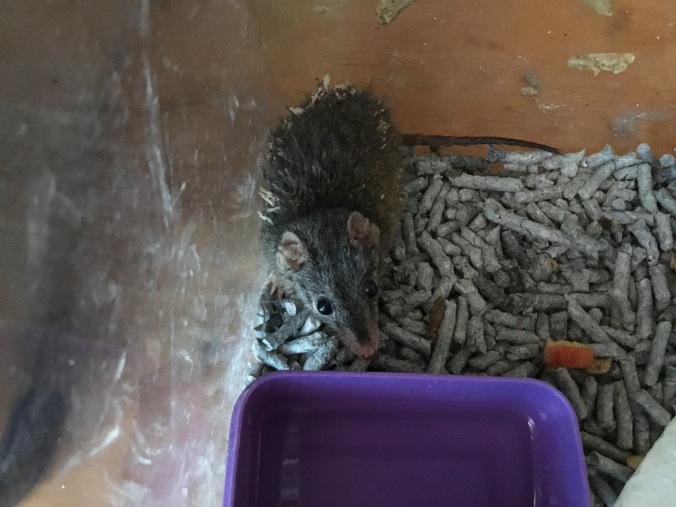 She tidied herself up gradually over the next few days and her poop looked fairly normal by then so we decided to let her go. We had given her a couple of dog biscuits to eat and a mush made from insectivore mix and rice powder. She was remarkably quiet and calm the whole time, which worried us a little (they are usually very fierce fighters) but I think she knows us very well as she has spent her whole life in the humpy and probably knows we don’t mean her any harm. That was when I discovered something new (to me anyway); antechinus blink their eyes individually. Watch the video below; you can see that she blinks each eye individually, and seemingly without any pattern to it.

This little observation fascinated me for about five minutes or so, until I suddenly remembered that I could video the behaviour. She patiently displayed her astounding skill for me while I fumbled with my phone and eventually got it working. Then she hopped gracefully out of the cage and darted away into the shadows, hopefully to rejoin her peers.

Antechinus have amazing mating habits; the males live for 11 and a half months, raised with their siblings by a single mother. During the late Autumn, early Winter the females come into heat and the males literally kill themselves chasing tail. They mate every female they can find (and at this time of the year the females make themselves easy to find) for about a week then they die from the stress of it all. The females mostly go on to raise the litter alone, without Centrelink benefits or anything (they can have as many as 14 babies with many different fathers) . Some females do not survive mating and die when the males do. The mating period in the humpy is loud and busy, with fights and make-up sex happening in the ceiling and under cupboards everywhere. The following month is very quiet though, as the surviving females rest and come to terms with raising their children alone. The noise and activity begins again a month later when they give birth and, after a few days have to find a lot of food for themselves and their young. Even the geckos try to stay indoors at this time of year as the new mums will eat just about anything they can catch. If we notice a female really struggling we will leave a few dog biscuits out for her as this is a quick, easy meal for a working mum to take home (sort of like Maccas night). When the young ones are feeding themselves at last (after a whole five weeks or so) most of the mums die from exhaustion, leaving between 20-50% of females to mate again the next year, no females survive more than two litters.

Nature is amazing isn’t it? I love discovering new things about the beings I share my space with.