We named our property Swallow’s Nest, mainly because I wanted to build my house like swallows do; round and made from earth. I shouldn’t be surprised that a pair of swallows has decided to try building a nest inside the humpy…we did ask for it after all.

Yes, that is a swallow’s bum

There are many legends about swallows bringing luck to a household; they are a symbol of spring and the rain coming (although here I prefer to rely on the Channel Bill Cuckoos to bring the rain), it is believed that a building where they nest will not burn down and it’s occupants will be protected from disease and harm (I found an interesting book about bird myths of the world, if you want to read about swallows go to page 40 of this book).

Personally, I have always been fascinated by the way they build nests; they carry a cob mix of mud, hair, straw and anything else they can pick up in their beaks and build a tiny cob cottage to raise their young in. They work all day every day on their project and have it finished within a few days. We had them nesting on the verandah of our previous house and I loved to watch them repair the nest every spring and reline it with soft stuff like feathers and dog hair. The babies seemed to hatch so quickly and then to grow even faster. The first flight of each clutch was always an exciting time for the whole household. When we moved from that house, the next occupant knocked down the nest and put up rubber snakes to deter them (he didn’t like the mess they make, and yes, they do make a mess), he eventually killed them because they wouldn’t leave their ancestral home. When I heard this , I cried for days. Over the decade we were at that house the swallows had become family, we knew each one and we loved them all. I imagined that they must have felt betrayed by us for not protecting their home. So when the young couple arrived here this year and wanted to build their house inside the humpy I was ecstatic (although we will be taking steps to reduce the mess).

First we need to put up a shelf to stop bits of cob dropping through to the floor. At the moment we have a bucket under the area where most of the mud is dropping. Then we will have to make sure the nearby furniture and book shelves have cloth covers over them as protection from poop and dropped mud.

Dropped cob from the construction site.

The short term fix; a bucket to catch cob mix

When the eggs hatch (after 21 days) one of the parents will fly out with the egg shell and drop it away from the nest. Finding an egg shell is often the first clue that you have babies. For the first week, mum (and dad, to a lesser degree) will bundle up the poop in neat white packages and fly them away from the nest too. After the new babies learn to stick their bum over the edge of the nest is when the most mess is made though; the babies will poop continually and make streaky messy, smelly marks on everything. We are hoping that a shelf under the nest will catch most of this poop and can be occasionally scraped clean (between clutches probably).

If this is going to become a yearly event, and it will if they manage to raise a clutch or two in the nest, we will have to look at arranging the furniture so the whole thing is easier to clean. We are a little worried about the position they have chosen being close to a known antechinus highway, but they will just have to take their chances, unless we can figure out a way to block access (perhaps a privacy screen?).

I will try to set up my trail camera to take photos of the build and clutch raising as it progresses. It may be difficult once the shelf is in place though. At this early stage of building it is easy for them to decide to go somewhere else, so we are hoping that the shelf building doesn’t frighten them away.

The shelf is up. Now to see if they come back…

They came back and continue to build their nest. I am busily trying to think of a way to block off access to the nest by the antechinus. No ideas that are workable so far though. I have decided to try setting up the trail camera this afternoon.

Well the trail cam idea did not work out at all; the photos are just too blurry to be useful. My daughter did climb up and take some photos of our new babies though. 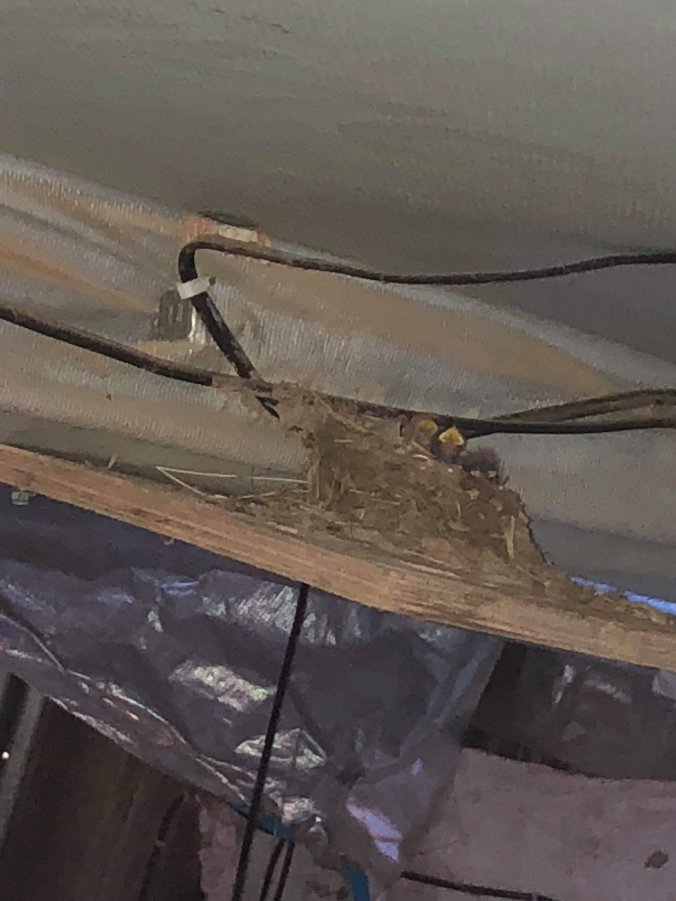 The babies are fine and the antechinus don’t seem to be able to get them. The babies are loud and very sweet at the moment. Let the mess making begin.