After nine weeks of taking him to work, staying home or arranging a sheep sitter to avoid stressing him out, we have finally found a suitable brother for Shaun. We have been combing the classifieds, Gumtree and animal shelter websites since Shaun was born, looking for an orphaned lamb we could offer a home to. We haven’t got a lot of money to spare so cost was an issue, as was the distance we would have to travel to pick up our new baby. Eventually I found a listing for orphaned lambs on Gumtree from a woman in Kyogle, which is quite close to us. I eagerly sent a message and found that she did indeed have some lambs left, one who was twelve weeks old and twins who were ten weeks old. Because we couldn’t afford to get the twins (and siblings should stay together), we arranged to pick up the little boy. Enter Sid….

Due to a car breakdown (requiring the car to be at the doctor’s for a week) we had to delay picking Sid up, but the big day finally came and we set off at 7.30 am for work with Shaun in tow.
We have been cleaning the local Backpacker’s for a month now and Shaun has been welcome to come with us and provide entertainment while we work (consequently he now has a following in Korea and Japan), it seems every time I emerge from a toilet block with buckets, sprays and brushes I find Shaun in the centre of an admiring mob with cameras (he loves every minute of it). While this has been a handy arrangement, it can’t continue forever as sheep grow up.
So Shaun’s last day at work proceeded as usual and we all piled into the car of a friend who gave us a lift to town to pick up our car (She also helped us clean…Thanks Meeka). We picked up the car, had a quick (and unsatisfying) lunch and sped off to collect our new baby.

The farm was a delight; animals of all kinds running around together, an eclectic collection of caravans as a dwelling and some very friendly dogs (felt just like home). We trooped out with Shaun on his lead to meet the herd (specifically Sid) but Shaun showed no interest in them at all. He walked along contentedly with us and didn’t even get excited by a thundering herd of sheep running past him.

Sid was considerably bigger than we anticipated, but he had the sort of face you just want to hug so we took him and the lovely lady who owned him did the rubber ring thing to castrate him for us (I am a terrible shot with those things). My partner made up a nest in the back seat with towels and newspaper and we put a collar and lead on him (which he took to easily) so I could control any leaping about. Shaun and I climbed into the back seat with him and the fun began….

Shaun sniffed Sid a few times then settled down to sleep away the trip (as he usually does), Sid on the other hand was politely uncomfortable (just having had a rubber band put around his testicles) and was a bit embarrassed to talk about it, so he settled for repositioning himself in various ways on the seat throughout the ride; he tried back to the front of the car with his back leg braced against the seat back, with his back leg down and with all his legs under him, he tried back to the seat back with all the afore mentioned leg arrangements and he tried standing up. At each position change he found it necessary to empty both bowels and bladder, resulting in a huge mess in the back seat and three (Shaun, Sid and I) very messy beings. We eventually made it home and I must say that Sid was very well behaved under the circumstances. As we got home a thunder storm rolled over our humpy…

Anyone who knows me will attest to my unreasonable fear of storms, but there was work to be done. Sid and Shaun were dumped in the playpen, an old chook dome, while we cleaned out the car. We scrubbed the back seat with a nail brush and lots of cleaning products (it is actually much cleaner now than before we went) while thunder roared around us. Shaun and Sid retreated to the little shelter in the playpen to bond/hide. By the time we had finished the car the storm had passed and we were able to bring the (now cleaner) boys into the back yard where they will be living together for a while. 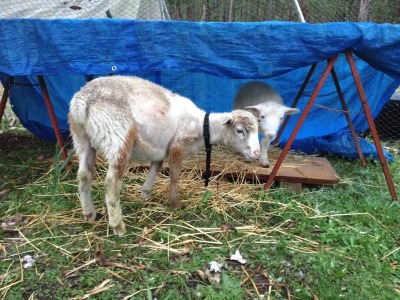 Shaun is spending all his days outside now and only comes inside to sleep in his little house. When we go to work he doesn’t stress as he has his bed and one of my shirts in the shelter with him and he is always very glad to see us home, as is Sid (he has picked up some of Shaun’s behaviours). It looks like they may bond well and become brothers, which means that Shaun will transfer his dependence to another sheep and may even learn to eat grass.

Sid spends his nights in the outside shelter on a pile of hay. He seems to prefer being outside (as most sheep do).