A lot of people have a dog or dogs; where we live most people have at least three. Many years ago I met a man who had a beautiful blue heeler, she was a young dog at the time and was very friendly. He told us we couldn’t pat or talk to her as she was being trained, so we didn’t. He used an authoritative manner with her and often spoke roughly to her, he never hit her in our presence and I don’t believe he did out of our sight either. He was very proud of the tricks she could do (sit, lay down, roll over, climb a ladder, etc), but never praised her for them. She had to stay in the car when at our place because she attacked other dogs. That blue heeler was later put down (by her owner) because she bit a child. This was a lesson for me as I had watched her go from a social, friendly pup to an antisocial, insecure, watchful dog. I know heelers can be nippy and often have social issues, but I believe her problems were caused by lack of socialisation and not being secure in her place. I took this lesson to heart and changed the way we live with our dogs.
We don’t ‘own’ our dogs, they belong to our pack (or we belong to theirs); we all live together and have our roles to play within the family. People are often surprised that our dogs don’t fight with each other or cause trouble among the other beings that live in and around our humpy. They assume that we must have a training program and keep the dogs (who are after all predators at heart) under strict control. The truth is far stranger and less exhausting than that; we simply treat them as part of the family (because they are). They are supported by the other members of the family and have the same expectations placed on them, they have to contribute to the well being of our home and they have become used to cross species co-operation. The rules in our humpy apply to everyone and are fairly vague, in general boiling down to the simple phrase ‘do what you want as long as it hurts no-one’. We don’t make rules about dogs on furniture, they sleep where they want, but they are not allowed to chase any living thing with the intention of harming it. They are confined to the yard unless we are with them, which is a rule designed to keep them safe, however they do come for a wander through the bush when we go walking. They can socialise with anyone who visits the humpy (and I take special note of those they choose to avoid), whatever the species.

We have three full time dogs and a part time dog in our pack. They are part of our family and help us live busy and fulfilled lives (sometimes by creating the work that makes us busy). They each have interesting life stories (well, interesting to me) which I would like to share.

First we have Jessica,

Jess is a rescue dog…with a twist. One morning, many years ago when my kids were small, my youngest daughter came to me and said she had dreamed we owned a dog who was black with white around the neck, short hair and a white tip on her tail, her name was Jess in the dream. The day after this one of my good friends text me and said that a dog had wandered up her driveway in a terrible state. This dog was very thin, had hair missing and a wound on the back of her head like she had been whacked with a pipe or something. She was looking for a home for this dog, when I told her about my daughter’s dream she said that this dog matched the description. Of course we set off to meet her and see if my daughter somehow had the ability to dream things into reality (and if so to implore her to dream up a Lotto win).
When we got out of the car the dog, who was very timid, poked her head out from around a corner. My daughter called softly “Jess?” and Jess trotted over and sat on her feet. After this miracle we naturally took her home, fed her up a bit and treated her head wound. She came with some fairly serious neurosis though.
Jess is a compulsive eater, we think because she was starved at some point in her life (perhaps all of it); she can’t go past food and will eat until she is sick, then come back for more. This has led to her becoming very over weight. Before she joined the family we fed our dogs from one central bowl which was kept full at all times. People would ask us why our dogs didn’t fight with each other and I would point to countless David Attenborough documentaries about pack feeding habits; in the wild the alpha dogs will eat first followed by the betas then the pups. That’s the way our dogs fed…all lined up to wait for their turn at the bowl. After Jess became dangerously overweight we had to change to individual feedings so we could limit her food intake. She also chews wire fences, gets obsessed with individual beings (a guinea fowl was the main one until last year) and is allergic to preservatives in her food (her hair falls out). We love her though and she is the most loyal and best behaved dog in our family.

Then we have Spot. 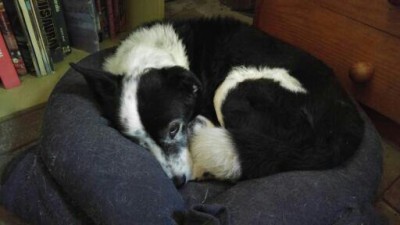 He joined us 17 years ago when the people we sold our TV to said they would pay our asking price if we took the last puppy from their litter. We said yes and a tiny bundle of black and white shaking fur arrived the next day. He has been my elder daughter’s closest friend for such a long time. In his long life he has been dressed in doll clothes, pushed around in a pram, made to complete obstacle courses and been the companion of many a long walk. Now he is old, he has lost most of his sight, can’t hear much and mostly forgets to go out to pee. People sometimes ask me why we keep him in the house when he makes so much mess and needs to be led wherever he goes, which is a lot of extra work. My answer is always; “Would you make your grandfather live outside just because he’s a lot of work?”. Spot has given us his whole life and I believe he deserves to be loved and treated with respect for the rest of it. He is still always the first to eat and barks at random stuff just like the other dogs even though he has no idea what he is barking at.

Bandit is the final full time dog in our family. 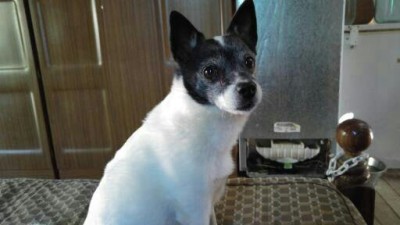 His family line has been with us since we became a family. My partner thought that buying me a $10 miniature poodle puppy who had been rejected by her mother and had to be fed every two hours with an eye dropper would be a romantic gesture, he was right. Gizmo (as that pup came to be named), grew up and got pregnant to a local Silky terrier named Ambrose and had Pucky who in turn grew up and got herself in trouble with a Chihuahua cross Pomeranian named Chopper (who dug under the laundry foundation to be with her). The result of Pucky and Chopper’s union was Busy, who lived with us for 16 years and had one puppy with a friend’s dog (after a proper wedding arranged by the kids), that puppy is Bandit. He is the smallest and the loudest of our dogs, he is very sweet about taking Spot out to the toilet; he walks in front of him and leads him out the door then waits for him to be finished and leads him back in.

Our part time dog is Val, the product of a marriage between Spot and Jess arranged by the kids.

Jess had 14 pups but we could only afford to keep one. It broke my heart to have to find homes for the other 13 pups, and I often wonder if they are OK. Val is my eldest daughter’s dog and lives with her most of the time. She still visits now and then and lives with us when my daughter is working or away.

Our dog pack works like any pack; we have an alpha male (Spot) who thinks he’s in charge and an alpha female (Jess) who is really in charge, we have two betas (Bandit and Val) who just try not to get in trouble. We have no fights and very few behaviour problems (aside from Jess’ issues) despite not having a training program or being in total control. What are your dogs to you? family pet, or just plain family.

2 thoughts on “Our dog pack”