The starter is finally ready to make bread. Sourdough starters take time and feeding to grow a strong and healthy community of yeasts.  Pancakes, muffins, doughnuts and crumpets are all possible before the starter is mature but you have to wait a while before making bread or it simply won’t rise,

I went looking for a simple and (relatively) quick method this time, as part of the reason I don’t make a lot of bread is the time factor, especially while I am working. I found this You Tube video and it is amazingly easy to follow.

Just mix the flour, water and salt together into a dough. Watch the You Tube video to get the knead-in-the-bowl technique, it does make things less messy. When the dough is a sticky mass that sort of sticks together cover it and leave sitting on the bench (or in an esky with cooler bricks like she does on the video). 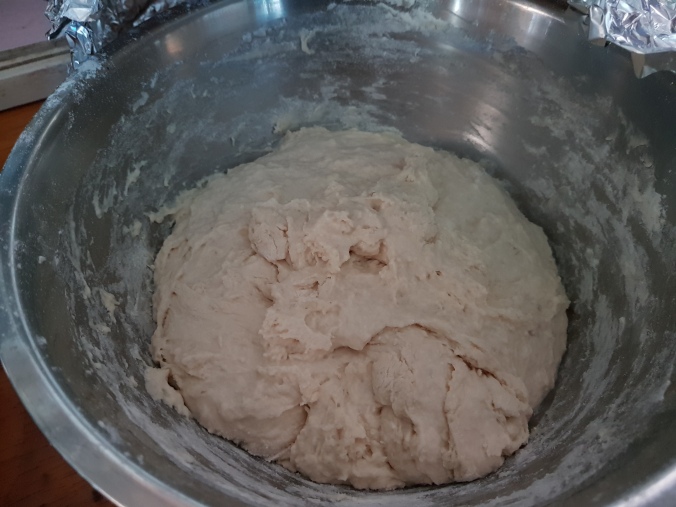 My sticky mess….er…mass of dough

After the bread has risen to about double the size of the original lump it is time to knead it a little bit more. Once again I used the knead-in-the-bowl method. It is also time to find a Dutch oven or a big baking dish with a lid (a camp oven would be ideal), you could also use a bread tin for the second rise.

I kneaded the dough for about two minutes then I plonked it out onto a piece of baking paper that had been sprayed with water and lifted it into a bowl to rise…again. 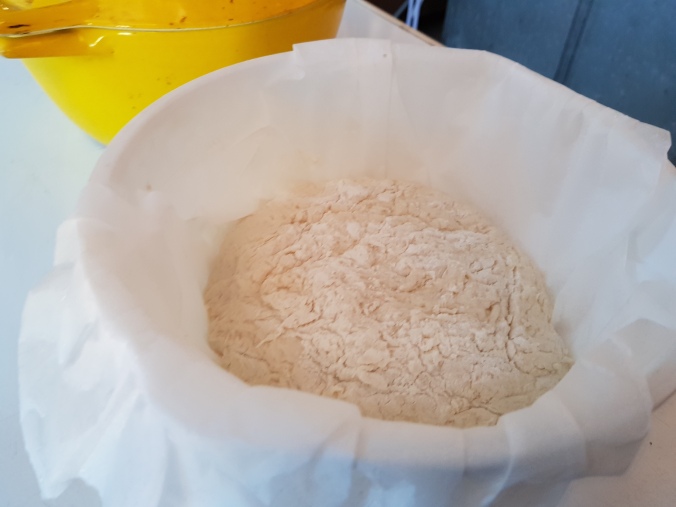 My dough on wet baking paper rising in its bowl

After a few more hours sitting on the bench (covered of course), the dough had risen to roughly double the original size again. I preheated the Dutch oven to about 200 degrees Celsius then put the dough into it, still on the baking paper. I baked the dough for 30 minutes with the lid on the Dutch oven then took the lid off and baked it for another 15 minutes to get a brown crust.

Close up of the final loaf

It made a fine textured, very flavourful bread

Making bread takes time, but not a lot of effort. Most of the action happens in the quiet bowl lurking in the dark corner of the bench. This is one of the easiest methods I have found so far. I think this will be my go-to recipe for this cycle of bread eating at least. Hopefully I can find time to make bread during the working week as it makes lunches so much easier to organise.