It has been a while since I posted about one of our local insects, so I thought I would introduce one of my favourites; the Huntsman spider.We have a few of these beauties living around the humpy and we try to leave them in peace where possible. My daughters do not enjoy their company however and I can often be found with a lunch box and lid in hand trying to capture an uncooperative spider to be relocated outside (a role I also often fill at work).

While these huge spiders may occasionally give you a fright by leaping out from behind something you have just moved, bear in mind that you frightened her first by moving her shelter and activity which raises the heart rate is good for cardio-vascular fitness. During the day they can be found peacefully sleeping in the corner of a room or behind a door (looking like a hit and run victim sometimes because they sleep in the strangest positions) but you can be sure they have spent the night hunting cockroaches, mosquitoes, flies and sometimes even geckos and skinks. Huntsman spiders do not spin a web, preferring to hide behind something until an unsuspecting victim bumbles by then running out at frightening speed to tackle said victim with some force. They do produce very small amounts of web to use for mountaineering down steep or slippery slopes, but you will rarely see it. 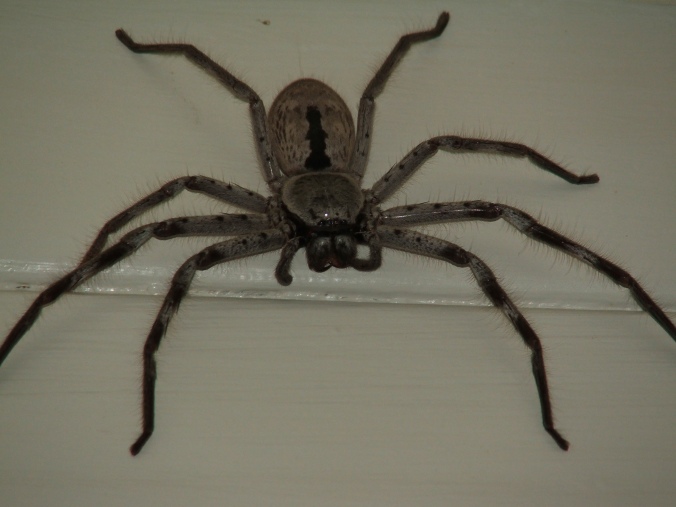 This is a photo of one of our bigger Huntsman; about 15cm across

There are about 1207 species of Huntsman spiders, about 155 of them in Australia. Spiders are a really diverse group; there are so many of them. If you would like to read more about Huntsman species, habitat and behavior just click here. 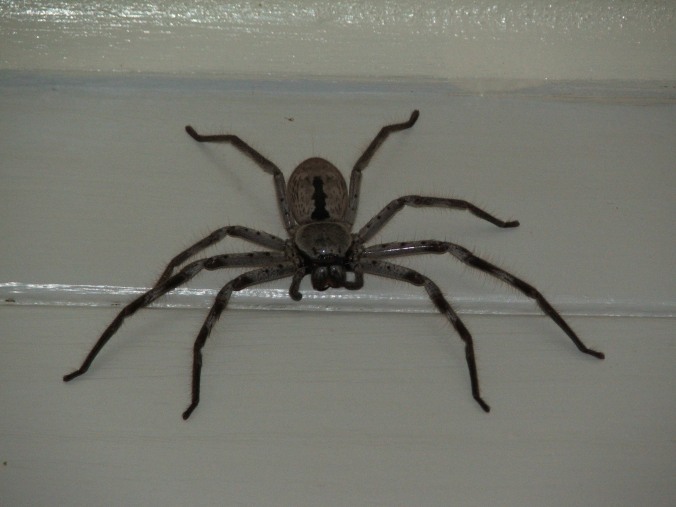 All sources I have read say that Huntsmen spiders are very romantic, the males will apparently fall in love with a young, virgin female and spend time hunting and protecting her until she is ready to mate (sounds like stalking to me…but each to their own). Those same sources also say that the females don’t try to kill the males after mating very often either, although I would like to say I have observed just that once or twice, so it does happen. Mating can last up to 10 hours (Wow) and is followed by the female going off to construct an egg sack containing hundreds of eggs which she will guard or cart around with her (depending on species) until they hatch. The young then climb onto their mother and she carries them about for a few weeks like a mother with a toddler clinging to her in the supermarket. One of these mother spiders once surprised my niece at my mother’s house; my niece was about two years old at the time and she opened a kitchen cabinet (as two year olds do) to find the mother spider on the inside of the door with hundreds of babies clinging to her. My niece reached down a finger to poke the pile and the baby spiders swarmed all over her for a few minutes. To her credit, she froze in place until the mother spider could recall all her babies and lumber off to hide behind the canned beans (probably grumbling about the rudeness of human offspring). After a few weeks of sharing their mother’s kills the babies are big enough to go off and find themselves a territory.

Huntsman spiders are territorial to a degree and the spider you see in the bathroom mirror is probably the same individual every time. They live for about two years, so you have time to develop a deep, caring relationship with the big girl that lives behind the picture of Auntie Flo in the spare room. I choose to see them as friends and co-inhabitants of our humpy; they do their share of the cleaning and never have loud parties, what is there to complain about?